Kanha originally formed a part of the Gondwana or the "land of the Gonds". The forests were inhabited by two aboriginal tribes, the Gond and the Baiga. The tribes practised shifting cultivation and subsisted on forest produce.

Kanha is one of the oldest wildlife sanctuaries in India.
It was declared as Reserve Forest in 1879 and upgraded to a Wildlife Sanctuary in 1933. Part of this was denotified later. The Raja of Vijayanagaram shot 30 tigers between 1947 and 1951. This caused a great uproar. 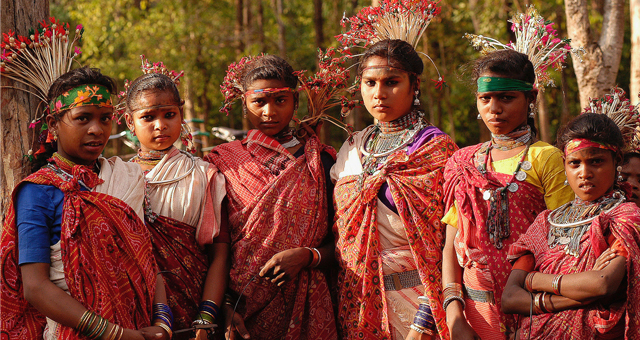 Baigas are among the oldest inhabitants of India. They are skilled woodsmen, practised shifting cultivation and survived largely by hunting and gathering honey, herbs, gum, flowers and fruits from the forest. These and handicraft items like mats, umbrellas and baskets are bartered for cloth, salt, utensils and ornaments in the weekly bazaars.

They have remarkable first-hand knowledge of animals and plants. Naturally, they make very good trackers. In Kanha if you have a Baiga for a guide, you couldn't have asked foranyone better.

Gonds have a racial affinity with the aborigines of Australia.

They speak various dialects of Gondi, an unwritten language. Some have lost their own language and speak Hindi, Marathi or Telugu. 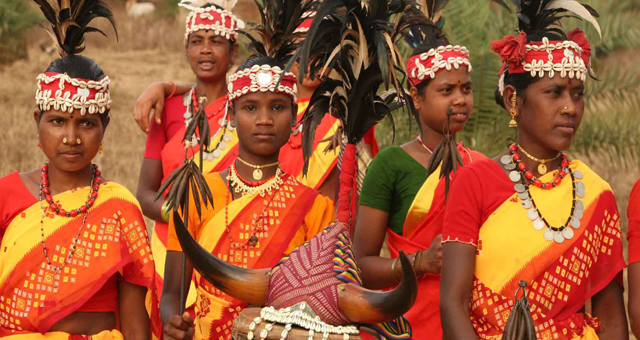 The forests of Kanha are replete with folklore and legends. It was here that some events of the Ramayana are said to have taken place. The stories of Kipling's Jungle Book are also based on Kanha. The tribals have their share of folklore and, of course, shikar stories are countless.


The Tale of Shravan Kumar

According to the great Indian epic Ramayana, Shravan Kumar was taking his blind parents on a pilgrimage. As the legend has it, he was passing through the forests of Kanha when King Dasharatha, the father of Lord Rama, was hunting in these forests.

One evening, Shravan Kumar went to a tank for water for his thirsty parents. King Dasharatha, in the darkness mistaking thesound of Shravan's pitcher being dipped in the pool for a deer drinking water, killed Shravan.

Hearing Shravan's cry, King Dasharatha rushed to the spot and discovered his mistake. Before breathing his last Shravan asked the king to carry the water to his thirsty parents. When Shravan's parents learnt of their son's death, they cursed King Dasharatha that just as they would die pining for their son he, too, would die without his beloved sons at his death-bed.

Shravan Tal, a small tank in the central Kanha meadows, is the site where the episode is believed to have taken place. Other spots connected to this story are Dasharatha Machan, the place from where King Dasharatha shot the arrow, and Shravan Chita, the place where Shravan is said to have been cremated.


How Kanha got its name

There are many stories about how Kanha got its name. Some say it comes from kanhar, a type of clayey soil found in the area. Others say the area is named after Kanva, a holy sage who once lived here and was the father of Shakuntala, the lead character in Kalidasa's famous play Abhigyan Shakuntalam.

The tale of Lapsi Shikari

An expert hunter and guide, Lapsi had a reputation of never missing a target. Lapsi was accompanying game sportsmen in the jungle when he had a close encounter with a tiger. He fought bravely but was killed. Lapsi is said to have died in 1930 and a gravestone has been erected at the spot as a memorial to his courage.This place is popularly known as Lapsi Kabar.

Bansi and the tiger

Bansi, a Baiga tribal, was a seasoned tracker. He had a hair-raising encounter with a sub-adult tiger one morning.

While monitoring a waterhole Bansi ran into a grown-up tiger cub. Seeing Bansi, the cub charged after him. Bansi scrambled up a tree, but the tiger continued the charge.

Even as this drama was being enacted, another tiger roared from behind. A large tigress and two more cubs were resting in the pool. Bansi was terrified, but the tigress was only calling to the cub to come back. The cub ignored the mother's calls. The tigress then came up to the cub and gave a louder call. The cub finally obeyed and, led by the mother, the family disappeared into the thickets.

Bansi slid down the tree and returned to his camp in record time.

This was an interesting case of a tigress teaching her cubs to avoid human beings.

Initially it attacked cattle and pigs, and injured humans only accidentally. It mauled and killed a cowherd, but did not eat him. The tiger then killed a man walking in the forest. It ate the body as the villagers did not carry it away. This was the tiger's first taste of human flesh.

All initial attempts to kill the man-eater failed. When it was deprived of feeding on three successive bullock kills it killed another man.Its last kill was made in February when it fatally wounded a man. When the villagers gathered at the scene of the tragedy they found that the tiger had not approached the dead body.

Nothing more was heard of the man-eater until a boy discovered a dead tiger with broken ribs and a several months old gun-shot wound. It was the Bhilwani man-eater.

The injury had prevented the tiger from hunting its natural prey. Clearly, human beings were responsible for the Bhilwani tiger turning into a man-eater.

It was a late afternoon of July, 2003. The overcast sky was hinting at a downpour. A forest guard and a game watcher, exhausted from patrolling, were returning to camp.

They were exhilarated because they had just seen a tigress with three cubs while coming down from Deori Dadar. The tigress had stopped, turned, growled at them and, as soon as her cubs emerged from the dense foliage, crossed the forest path and disappeared swiftly.

These two men were old hands and had experienced many thrilling incidents. These "shikar stories" were recounted countless times to friends with, of course, vivid additions!

They were looking forward to steaming cups of black tea flavoured with lemon grass. Suddenly they heard snorting, and a huge sloth bear rushed head-on at the forest guard and threw him to the ground.

The ferocious animal started to maul the guard. The guard shouted for help and to try and frighten the bear and kicked at the animal. He tried to save his face and eyes by covering them with his hands.

The shocked game watcher pulled himself together and, shouting at the top of his voice, hit the bear several times with his staff to divert its attention from the forest guard.

The bear then turned on the game watcher, forcing him to step back, and continued its attack on the forest guard. The enraged bear was inflicting serious wounds with its sickle-like claws on the guard's skull and face. The game watcher started poking the bear's hairy back with the pointed end of an umbrella. But the bear paid no heed.

It was then that the game watcher saw two bear cubs who were eying the whole incident with curiosity and innocence. With a flash of inspiration he rushed at the two cubs, shouting hysterically.

This ploy worked and diverted the attention of the mother bear known for her caring and defensive attitude towards her young. She left the forest guard and rushed to rescue her cubs. She quickly helped the two cubs climb on her back and disappeared into the dense thickets.The game watcher lost no time. He tossed his injured companion over his shoulder and hurried away to the camp as fast as he could. The forest guard was in a terrible shape. His skull had been clawed and he had many deep wounds on his body. His intestines had popped out of a deep gash in his abdomen. The game watcher pushed these back in and applied first aid.

The forest guard was then admitted to a Mandla hospital. His condition was so critical that he had to be immediately moved to a private hospital in Jabalpur, a larger city. In about a week or so, he was declared out of danger. The doctors later told the park management that his skull had been so badly damaged that a significant part of the brain was exposed and that only the first aid given intelligently by the game watcher had saved the forest guard from fatal infection of the cerebrum, which normally sets in rapidly in such damp weather.

Later, at the Mandla Stadium Ground on Independence Day, the game watcher was awarded amid thunderous applause a cash prize of Rs.5,000 and a citation for his presence of mind and bravery.

Dying to save a deer

Ravibhan Singh Thakur was a forest guard posted to the Chhawarighat Camp of the Supkhar Range of the Kanha National Park. A handsome, well-built man of 32, he was affectionately called Ravi by his friends and colleagues. Ravi belonged to one of the many surrounding villages. He was a disciplined, brave and hard-working forest guard, who looked forward to well-deserved promotions in service, which would have greatly helped his family that was rather hard up.

Though it was an early afternoon of March, 1989, the sky was overcast and there was still a characteristic chill in the air due to the moist Supkhar forest that stretched all around the forest camp. Ravi had just returned from his routine patrol and, after slipping into a casual dress, was enjoying a cup of black tea. His game watcher had already left for Supkhar on some errand and Ravi was alone, sitting on his camp-cot outside the front door.

The illness of his wife was on his mind. Though he had bought her the prescribed medicines before coming to Chhawarighat he was also planning to visit her the next day, in case she needed another check-up. She had been a constant source of inspiration to him all these years.

A truck came to a noisy halt on the road just opposite the camp and disturbed his train of thoughts. A head emerged from the side window of the driver's cabin and shouted to Ravi that a chital was trapped in the nearby tank and was struggling for life. Ravi lost no time, changed into khakis and hurried towards the Peeparwada tank on his bicycle. He, however, did not forget to write with a charcoal piece a quick message on the wall for his game watcher whose help he might need at the tank.

Ravi reached the tank and quickly took stock of the situation. The chital seemed badly trapped in water weeds and had almost drowned. It was struggling frantically in a last bid to free itself from the deadly mesh.

Being a good swimmer, Ravi took off his clothes and dived into the tank. Little did he realise that this would be his dive into the other world. The tank was infested with weeds, and he had difficulty swimming towards the trapped chital. Somehow he reached there and tried to lift the animal out of the water so that it might take a few breaths of air. He found the animal so badly entangled in the weed that it was almost impossible to even move it slightly. The chital was alive but was dead-tired.

Ravi took a deep breath and went underwater to free the animal from the weeds. He worked hysterically, coming up every now and then to take a quick breath of air. A little while later, he got the shock of his life when he realised that his legs, too, were inextricably entangled in the weed-mesh. He tried hard to free himself from the death-web, but in vain. He felt that he was falling into a dark well amid the fading calls of his sick wife from the bank of the tank.

Thus perished one of the most promising members of Kanha's frontline staff. Ravi's wife is now a forest guard in the national park.