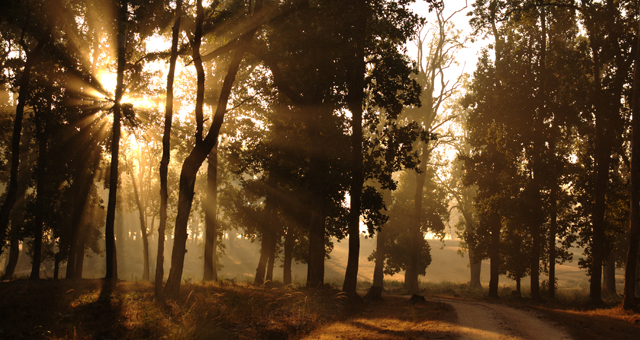 The meadows of Kanha are perhaps the best places to view wildlife. Most of these meadows were once sites of human settlement. After they were vacated they developed into beautiful grasslands.The Kanha meadows are popular converging points for herbivores. One can see chital, gaur, barasingha, wild pig and sometimes carnivores like tiger and jackal. There are times when chital congregate here in thousands. Sonf, Bishanpura, Sondar and Ghorela are some of the other important meadows of Kanha. Apart from providing shelter and food to animals, the grasses hold the soil together and prevent it from being washed away. They soak up water like a sponge and gradually release it. This helps recharge groundwater.

The Park got a comprehensive interpretation package developed by the Centre for Environment Education, Ahmedabad (CEE) in collaboration with the United States National Park Service in 1990. This package not only matches the best in the world but also marked another 'first' for Kanha.

As a great deal of new information has been generated and perspectives have changed, this package developed in the early nineties was upgraded in 2003-2004 by CEE in collaboration with the Kanha Tiger Reserve Management, M.P. Forest Department. A new building has been built at Kanha to interpret Kanha's conservation history, a few subjects have been added in the old museum and several new publications have been printed. 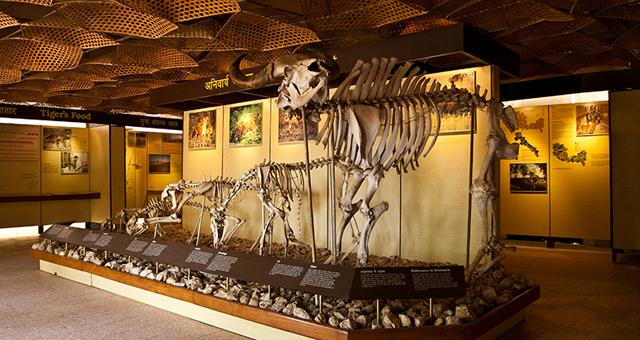 A trip through the Kanha Museum is an exciting and educative experience. Models, photographs, specimens, interesting and illustrated notes on the flora and fauna enhance the visitors' understanding of Kanha's amazing beauty and complexity of the web of life. The museum also has a thrilling light and sound show. An entire building in the museum complex is dedicated to the conservation history of Kanha.

Orientation Centres at Khatia and Mukki:

Sounds of the jungle, photographs, models, souvenirs, touch screen and wildlife film shows initiate visitors into understanding the life-forms of the park and their interrelationships in the Tiger Reserve.

Lying between Kisli and Mukki, this area provides a good view of the small openings in the forests. Kopedabri was once a huge meadow which harboured a lot of barasingha, but sal and bamboo have now advanced and the meadow as such no longer exists. One can spot chital, gaur and sambar here with ease. If you are lucky, you may even come across a tiger by the roadside.

Bamhnidadar is one of the highest plateaux in Kanha. From here one can have a panoramic view of the forests and grasslands of Sondar, Ghorela and Bishanpura, which were once forest villages.

An enchanting view of the vastness and timeless beauty of Kanha can be had from this high vantage point. It is also a fine location for seeing harriers and other birds of prey. 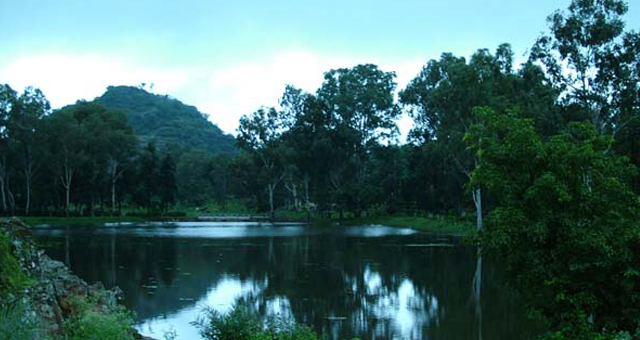 One trail is located near the Khatia entry point and the other is along the river Banjar at Mukki. Visitors can walk on these trails and discover the intricate relationships in nature.

Located in the Mukki Range, this is one of the finest water bodies in the Park. Besides attracting a variety of wild animals, it is a frequent haunt of the barasingha which can be sighted feeding on the aquatic plants.

Also in the Mukki Range, this waterbody attracts a variety of birds. It is frequented by a variety of wild animals including the tiger and leopard.

Other places of interest

An expert hunter and guide, Lapsi is said to have been killed at this spot in 1930.

Lapsi was accompanying game sportsmen in the jungle when he had a close encounter with a tiger. He fought bravely but was killed. A gravestone has been erected here as a memorial to his courage.

This small tank is said to be the place where Shravan Kumar met his death at the hands of King Dasharatha.

Barasingha and sambar come here to feast on the lotus leaves in the tank. It is an important water source in the area and attracts a good number of waterfowl in winter.Shravan Chita (Shravan's pyre) Shravan Kumar is said to have been cremated at this place. The colour of this area is strikingly different from its surroundings, which adds to the mystery of the story. Dasharatha Machan (Dasharatha's hide) On the ridge opposite Shravan Tal is Dasharatha Machan. It was from here, the story goes, that King Dasharatha unknowingly shot the ill-fated arrow which killed Sharvan Kumar. The hill on which the machan existed is known as Macha Dongar. It is said that King Dasharatha used the machan as a hide-out while hunting.

Shravan Kumar is said to have been cremated at this place.

The colour of this area is strikingly different from its surroundings, which adds to the mystery of the story.